I feel like I’m heading back to school after Christmas break. And by back to school, I mean back to life, back to reality, which thankfully does not include those pesky classes/exams anymore. And by Christmas break, I mean leaving my routine to spend so much quality time with my mom that my happy heart could burst. That lady has the softest hands and I got to hold them (and J’s) for a full nine days. She and my great-aunt came over to Europe for the first time. It was fun showing them around and seeing how excited my mom got over our new area of the world, but I might have to say that if the phrase ‘it’s just so different’ is retired, I wouldn’t be mad at it.

We had back-to-back visitors for two weeks and I’m slowly getting back into the normal swing of things. J and I have been indulging in some much-needed us time and I’ve been trying to make the Jolly Ranchers they brought last as long as possible – mmmm American candy. So, let’s see if we can recap the flow of their trip, shall we?

day 1 :: After we scooped them from the airport and gave them a little bit to unwind, the girls took to the streets. I had an Etsy order that I needed to ship off, so we checked out the glamorous post office and strolled around Place Flagey. J got off of work and introduced them to Brussels traffic to see the Atomium.

day 2 :: Royal Greenhouses of Laeken. Mama Jo and I were both disappointed that King Albert and Queen Paola weren’t lounging on their patio with toddies waving to their visitors. There was a (relatively) quick stop at the Basilica of the Sacred Heart of Koekelberg and a classic Belgian meal at La Bonne Humeur. 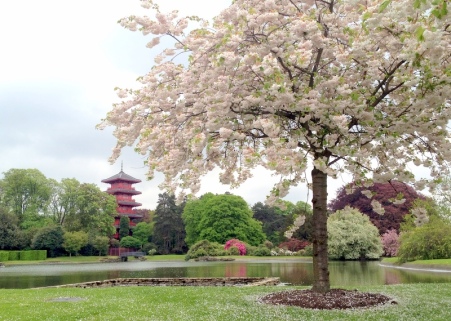 day 3 :: Country numero deux. Clerveaux in Luxembourg to see a castle and how small the EU signs are – welcome to a new country, did you notice? We quickly realized that Nanan is the proudest American there ever was, so we passed through Bastogne, Belgium to see the Mardasson Memorial for the Battle of the Bulge. I’m fairly certain seeing ‘Louisiana’  was the highlight of her trip. Also worth noting, 50 cent restrooms. Their minds were blown. 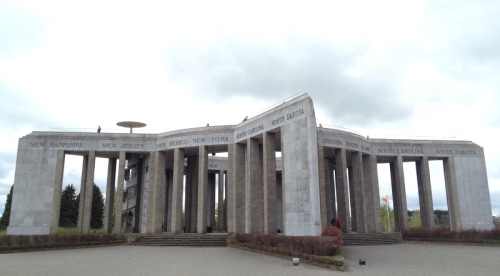 day 4 :: We drove to the opposite side of the country to visit Bruges by the northwestern coast. After we ‘ooo’ed and ‘ahh’ed over the Medieval city, J drove us home and cooked lasagna rolls with spinach & artichoke dip. Y’all. #Drool. The Croatians joined us and I immediately got bumped down to 1b on my mama’s favorite scale once she met their newborn. I’m going on the record to say that I’m not jealous…although, little one is just lucky I’m such a huge fan too.. 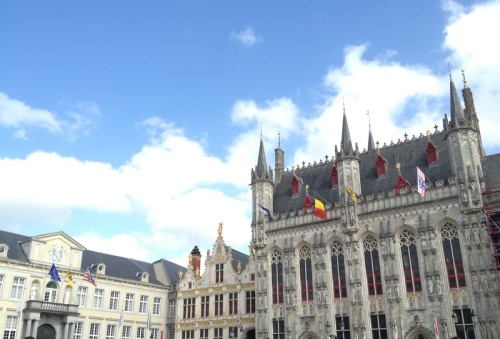 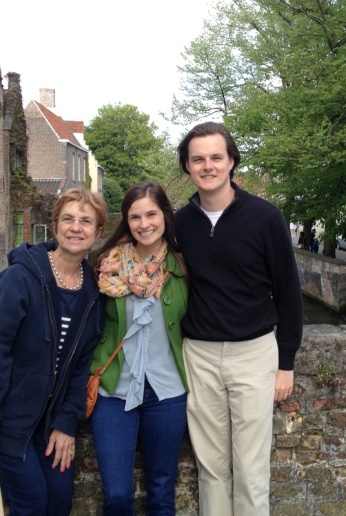 day 5 :: Day 5 and we’ve drug them all around the country, maybe we should check out our own city! So, to the center of Brussels we went – the royal palace, Grand Place and Musee Horta. It was our first time checking out Victor Horta’s home-turned-museum too. This guy had some flair. He designed a lot of the crazy cool buildings in Brussels. And he designed almost everything in his home and did not slack on the decadence. Then, Belgian frites from Jourdan (the verdict is still on out on our fave fritkot). 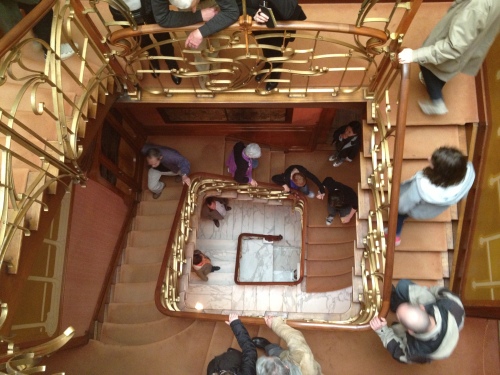 If J has any question where my silly giddiness comes from, he doesn’t have to look far. Like mother, like daughter. Mama Jo brought her Mother of the Bride dress that she adorned last year for our big day over the pond and I took my dress out of preservation. Mais la! We had the best time dressin’ up and dancin’.

And that’s just the half of it.

Y’all. Look at these chickens! When we had our little castle tour the other weekend (what a weird phrase), I met these chickens. They were outside of that wonderfully pink building near the first castle and these cluckers made my day. I couldn’t decide whether or not this Roger fella (he kinda looks like a Roger?) loved me or wanted to peck my eyes out, but I was intrigued. Well, intrigued only outside of the gate….so he couldn’t reach my eyes. That was until I did some research because I’m still in love with Roger and he’s a chicken and it’s been two weeks and that’s weird. Anyway, Barred Rock Chickens, as they’re called, are friendly and curious and will “inquisitively watch you as you move around.” So, we all agree that in the event that J and I EVER get tired of living in the city and decide to have a yard big enough to own Rogers, we’re getting chickens, right? After a dog….because we need photos like this. And also, I googled ‘dog and chicken friends‘ for you. You’re welcome.

^ Do you see how the chickens/roosters came running when they saw us?? so curiously. so inquisitively. And how the ducks had a different plan. | Down here is what I’m talking about wanting to peck my eyes out. Don’t be so creepy, Roger.

Also, I’m aware that no one should have this many photos (plus a video) of chickens on their phone. 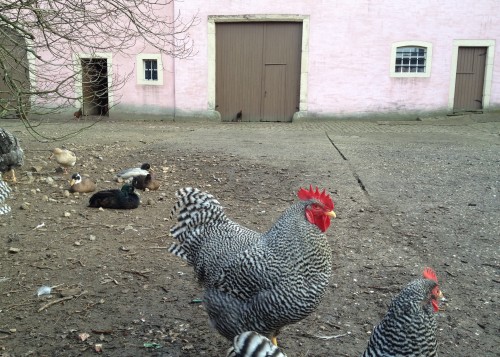 on a completely related note..

The eggs here are all brown. And the yolk is a whole somethin’ different too – almost orange. The locals say it’s because they’re free-range..but who knows.

HAPPY EASTER!
(see how that worked out?)

On Being A Ruler

If IIIIIII were a ruler in 1090, I would go and find the prettiest landscape around, surrounded by mountains. Then, I’d find a hill (or have one built) and put my castle right on top of it. When the people wanted to come party in my neighborhood, I’d let them build a city at the foot of my hill filled with colorful homes and cobblestoned streets. That probably sounds a wee bit self absorbed, but c’mon, I’m a 1090 ruler. Vanity comes with the territory…literally. 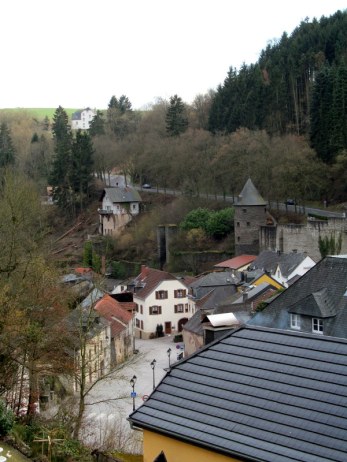 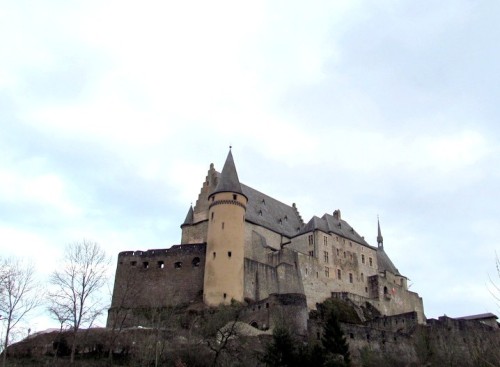 Valley of the Seven Castles

Saturday we drove over to Luxembourg to check out the Eisch Valley. Street name – Valley of the Seven Castles, because…uhh…because there’s castles and it’s just cooler. Most of these grand homes have been left for ruins and/or tourism, some turned into private residences or administrative offices, and one met us with 15+ firemen onsite – oops. 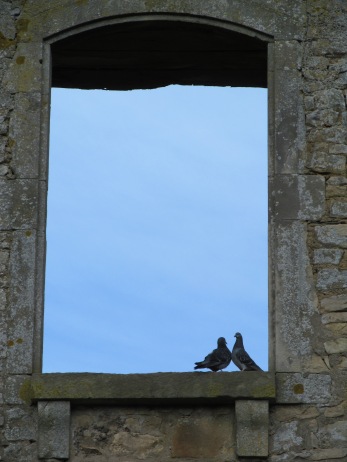 END_OF_DOCUMENT_TOKEN_TO_BE_REPLACED

we haven’t received our thank you note yet, but we figured once they get back from their honeymoon

It was a big weekend. For us, we were busy bees setting up our new home. But, for Luxembourg, they had quite an exciting two day fest celebrating the nuptials of the heir to the throne, Prince Guillaume, and his beautiful bride, Princess Stephanie. The Princess, born a Belgian, wore a stunning Elie Saab gown with a 13 foot train. wowza! And I thought OUR aisle was long…sheesh! I should probably invest in a fancy hat in the event that we are cordially invited to one of these royal affairs.

Don’t worry, we sent our handwritten well wishes..(Thanks mom for Southern manners!) While we were visiting Luxembourg, there was a large gathering in the square surrounding a huge greeting card, so, of course, I just had to wait in line to sign it.  Having royals is fun!

Have fun on your surprise destination honeymoon, Guillaume and Stephanie! If you go to Jamaica, tell the beach waitress we said hi!

Firstly, I have a (large) touch of claustrophobia. I’ve been known to jump out of elevators as the doors are closing because there’s too many people. I about freak out when I can’t get my shirt over my head quick enough….what if I get stuck and my hands are just flailing around in the air and there’s an emergency? And don’t even get me started on tunnels….so pointless. so dangerously pointless. (I know, I know, Minke, they serve a very important role in the Brussels transportation system. But bridges are good too.) I’m tense even thinking about it. And I hope all of my friends survived the Dallas park opening over the indeed pointless new downtown tunnel….I’m completely convinced that they did not account for all of the weight that the park is supposed to hold. Okay….

So secondly, on our trip to Luxembourg, we visited the Casemates du Bock. The Luxembourg fortress. The first tunnels were dug out in 1644 for underground defenses below the old castle..lots of canons and storage area for explosives. The entryway stairs lead down to the huge archaeological crypt. More stairs lead down through dungeons to the casemates themselves, a series of long tunnels down into the rock parallel to the road above. Crazy cool.

The views looking out from the fortress were incredible.. 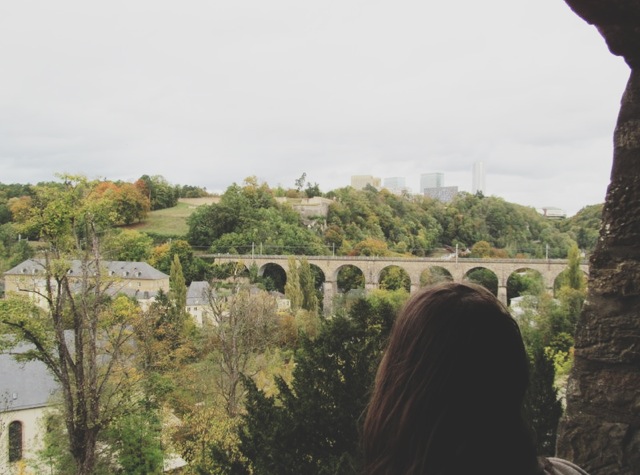 But then we got to these stairs. Y’all. These stairs weren’t playing around..

J went down them and left me up top. And I tried to go down them, I really did. But there were people coming up and they were going so slow and then I thought I heard more people and then other people were just standing looking at me while I kept calling J’s name and they were getting too close to me so I ran to a window-sorta thing for air and then J came up and said it wasn’t worth it. Phew! But, really. I tried. 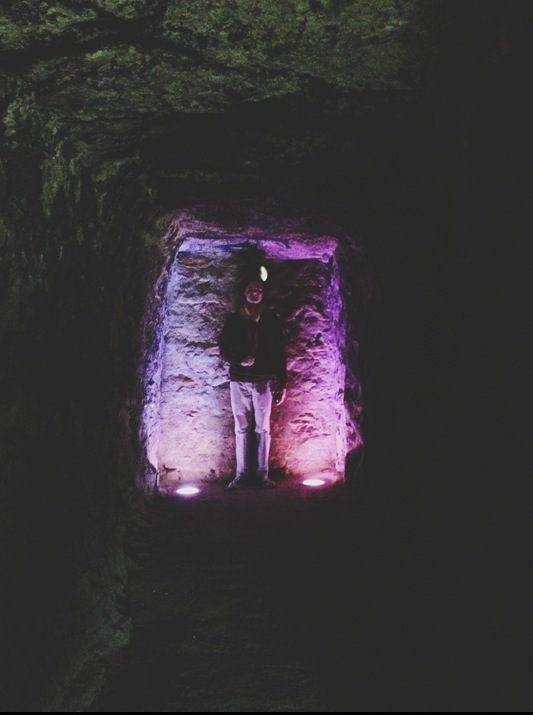 But we made it outta there. 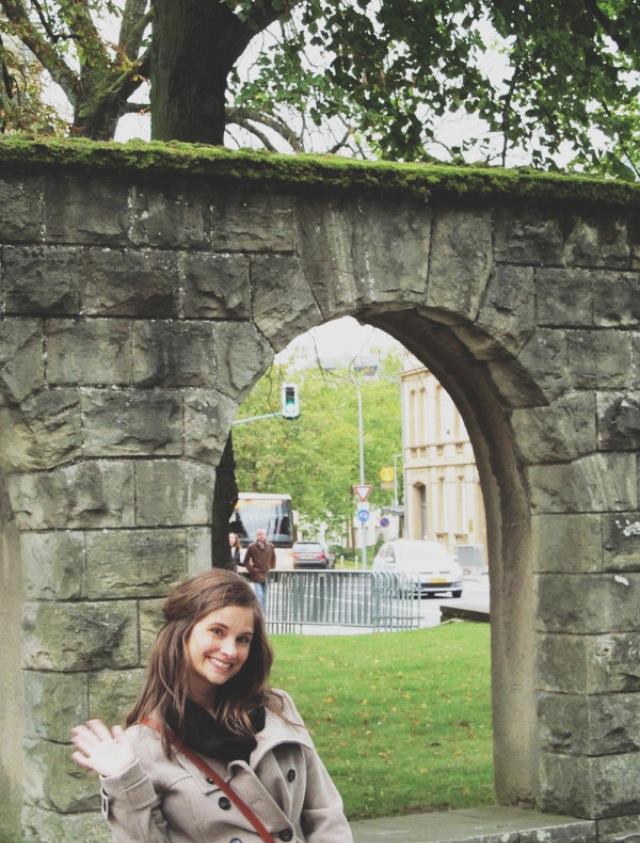 And, hey, we got to cross off a site on the UNESCO world heritage list!

Just in time for Halloween..

Oh, Luxembourg. You and your gorgeous views.

Saturday, we set off to the East to check out Luxembourg City, Luxembourg. It’s full on fall here and as we were driving through the trees with their every autumn shade showing off, we passed an exit sign for Paris. Oui. We live in an area of the world where there are exit signs for Paris, France. Man, we’ve got a lot of ground to cover in our two years here!

We spent the day walking through the cobblestoned streets, checking out the Notre-Dame Cathedral, the Grand Ducal Palace and the Casemates du Bock. 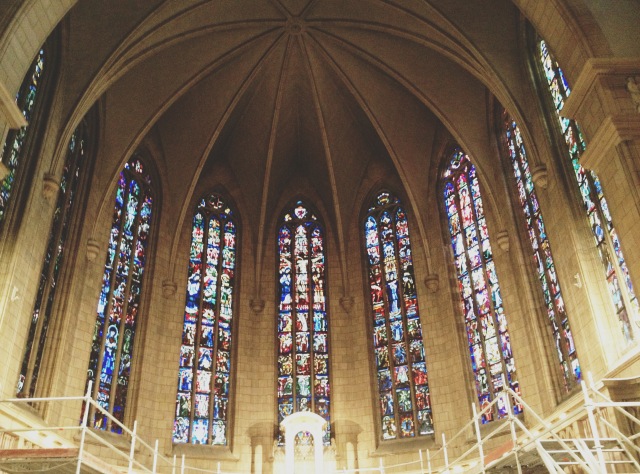